At a quiet crossroads on La Palma, you may be surprised to stumble across an almost hidden enclave filled with sub-tropical plants, dragon trees, man-sized lizards and circling crows.
You may think you've been time-warped back into a prehistoric era and just need a few dragons to make the fantasy real. But this is no fantasy as everything is depicted in tiny mosaics. 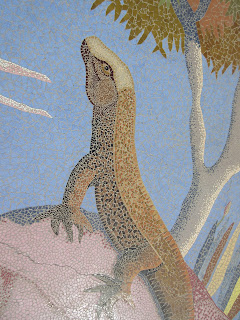 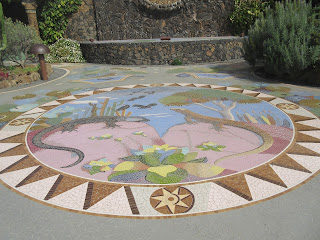 The Plaza de Glorieta in Las Manchas Abajo (or the Plaza de Los Cuatro Caminos, Plaza of the Four Roads) is an impressive and
painstaking masterpiece of design by La Palma's own Luis Morera. Word has it that the late Cesar Manrique, the famous and much-loved Canarian artist and architect, recommended Morera for the work. 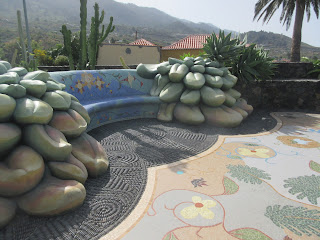 Each scene is made  from tiny, fragmented tiles of every colour. Even the benches are decorated in a beautiful mosaic of flowers. Meanwhile, other natural elements are used with swirls of small, smooth stones from the ravines and beaches of La Palma. 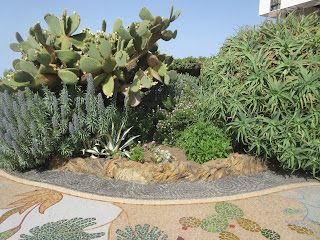 Volcanic rock is used to showcase a stage, pillars and shady pergolas brimming with bougainvillea. 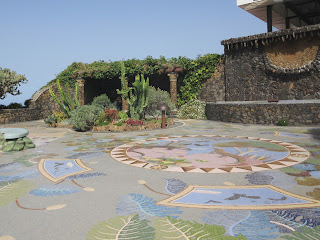 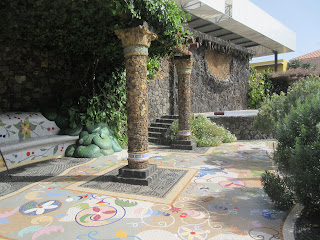 Natural foliage and Morero's own impression blend almost seamlessly into one. 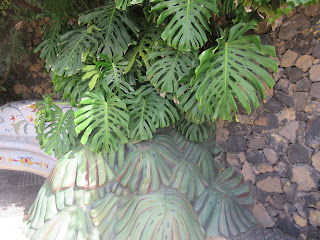 Thankfully there was help to create this masterpiece but even so, the work still spanned from 1993 to 1996. That's a long time to be working on your hands and knees! 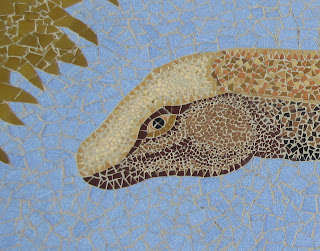 Nearby facilities and location:

A few metres away is the grocery store Las Manchas de Abajo which although small is massively well stocked. And less than 100m away is the small Casa del Museo de Vino las Manchas, Wine Museum House, not large put pleasant none the less and you can also buy La Palma wine there (closed Sundays).
The Las Manchas Plaza de Glorieta, like nature, is never closed and there is no entrance fee. You just need to get yourself there!
For transport by bus to the plaza, take #205 From Los Llanos main bus station to Las Manchas. Buses run at 09.00, 11.00, 13.00 and 14.45hrs. Buses return 45  minutes later or 2 hrs 45 mins later.
By car, take the LP213 to Todoque and continue south to Las Manchas. From Fuencalinete, take the LP2 towards Las Manchas and then Las Manchas Abajo.
Have fun!