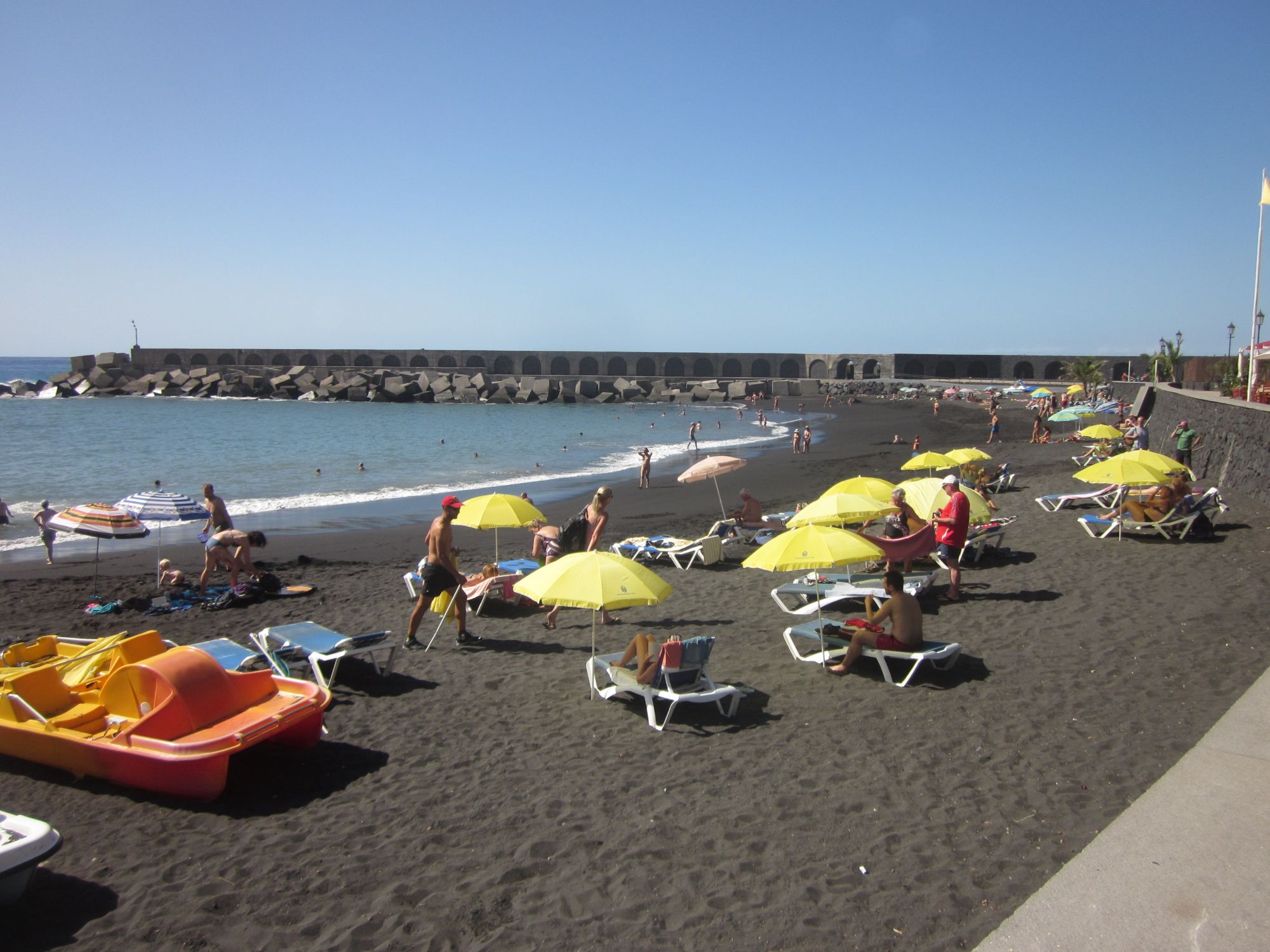 Tazacorte is the smallest municipality on La Palma but despite that, it is probably one of the most fascinating!
On the face of it, Tazacorte is just about tourism – after all it has a great beach, a colourful selection of holiday apartments, fish restaurants along the boulevard, the biggest marina on La Palma and the most sunshine hours in Europe. Quite enough for most people but in fact, that’s just El Puerto de Tazacorte and there's another half to go yet.
Just 1.5km inland is the other half – the small town of Tazacorte with its own charm and a great local vibe. This is where you’ll find the facilities of supermarkets, small shops, banks, etc. along with a central plaza for sipping local wine or a coffee while putting the world to rights. But take a step just one street back and you’re in the tangle of narrow cobbled streets lined with tiny cottages and three storey houses. And opposite the church and down another cobbled street is the area where the sugar cane barons lived in their mansions.
Meanwhile, if you’re looking for a bit more activity, La Palma's largest city of Los Llanos is only 4km away. 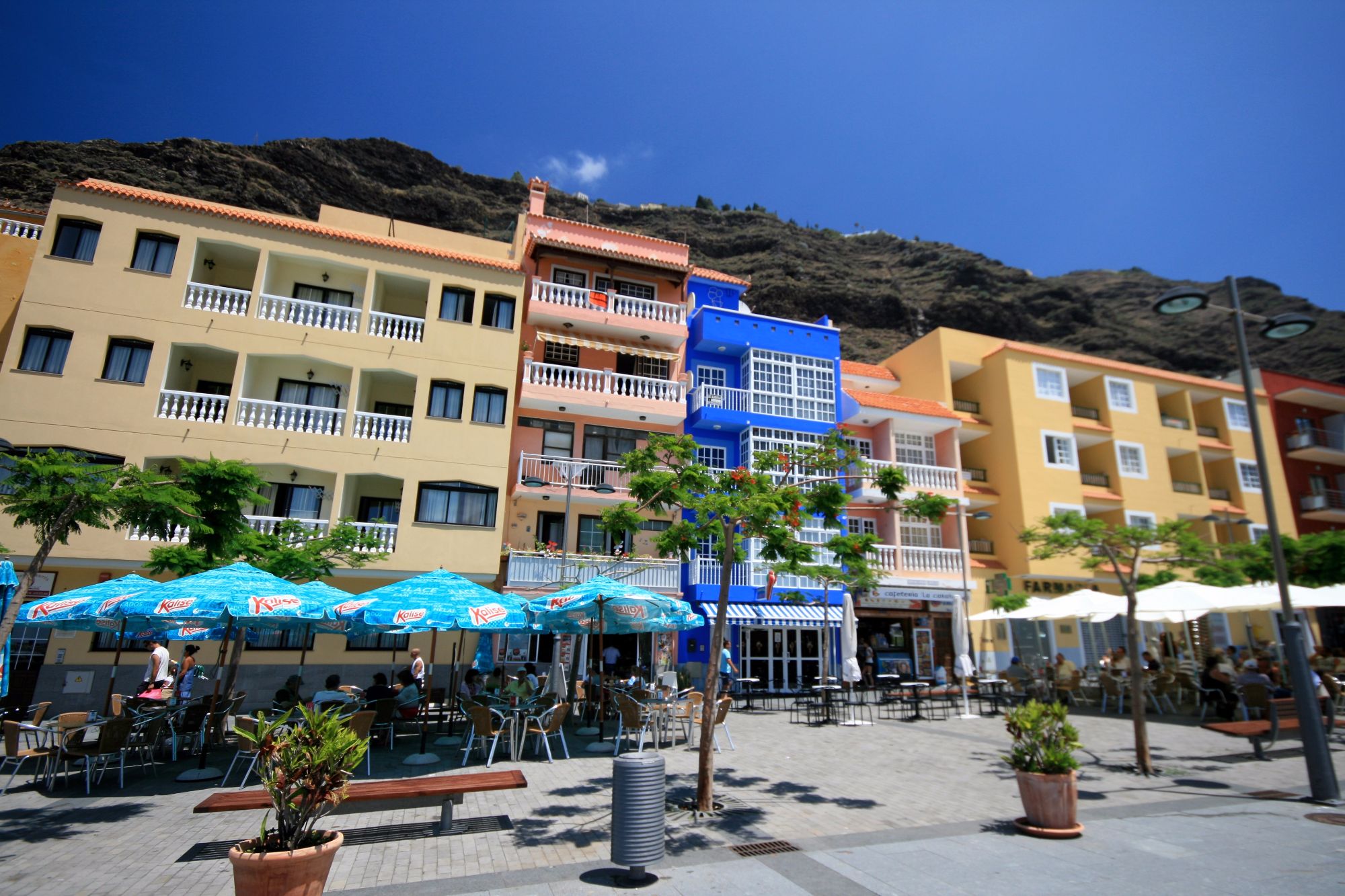 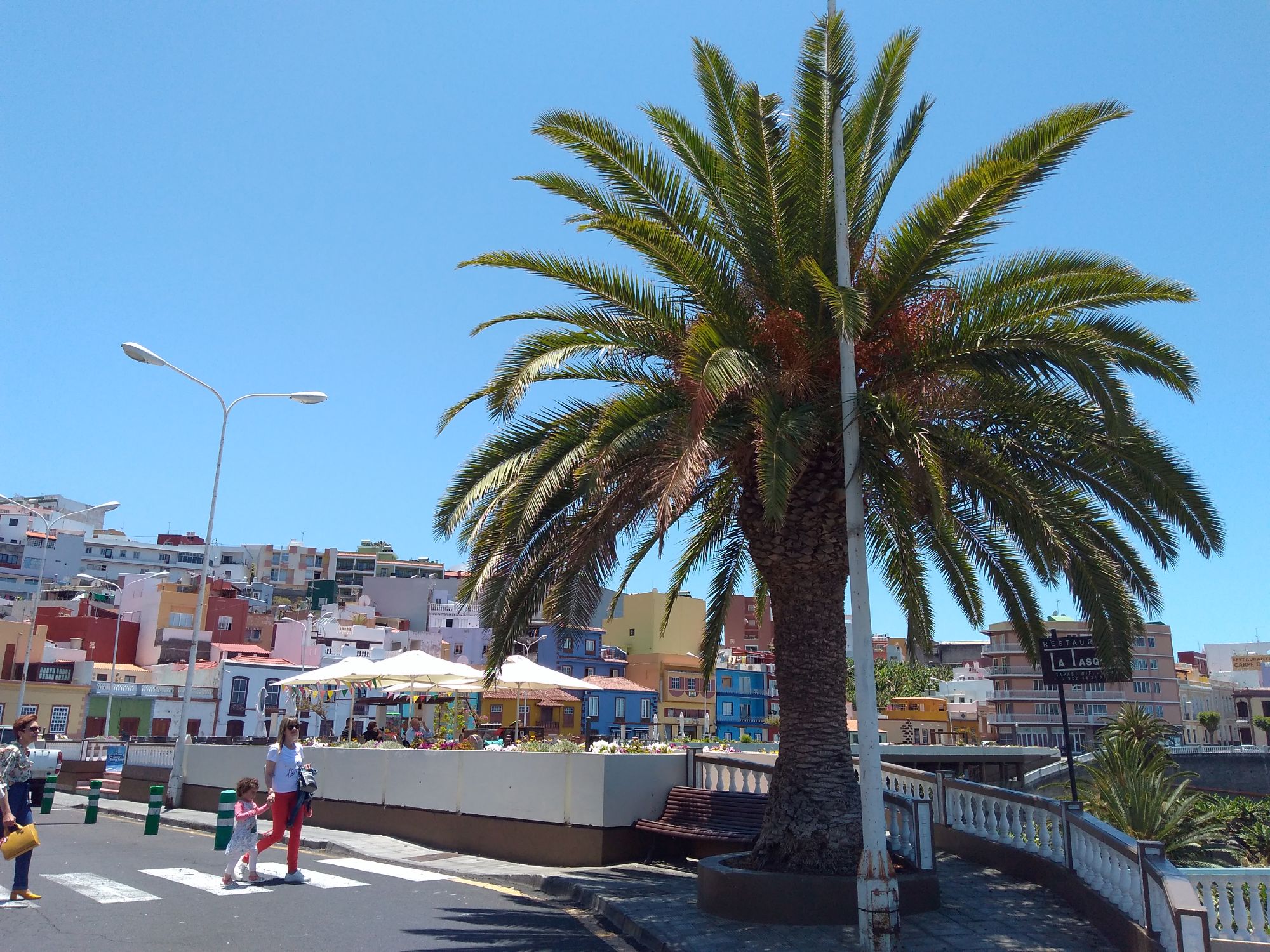 How did Tazacorte get its name?
On the 29th September, 1492, Adelantado Fernandez de Lugo and his troops (the Spanish Conquistadors) arrived on the beach at Tazacorte to invade and conquer the island of La Palma. The king of Tazacorte, Tazo, died heroically trying to defend his people and his lands and ever since, the area has been called the Corte del Rey Tazo, the cutting down of King Tazo, in other words - Tazacorte.
Where and what is Tazacorte?
Tazacorte is one of only three beach resorts on La Palma with Puerto Naos and Los Cancajos being the other two. Tazacorte lies by the coast in the west of La Palma and along with Puerto Naos is one of the sunniest places on La Palma - in fact, many say that it is the sunniest place in the whole of Europe. To the north of Tazacorte is the municipality of Tijarafe and to the east and south is Los Llanos. To the west is the mighty Atlantic - next stop America! 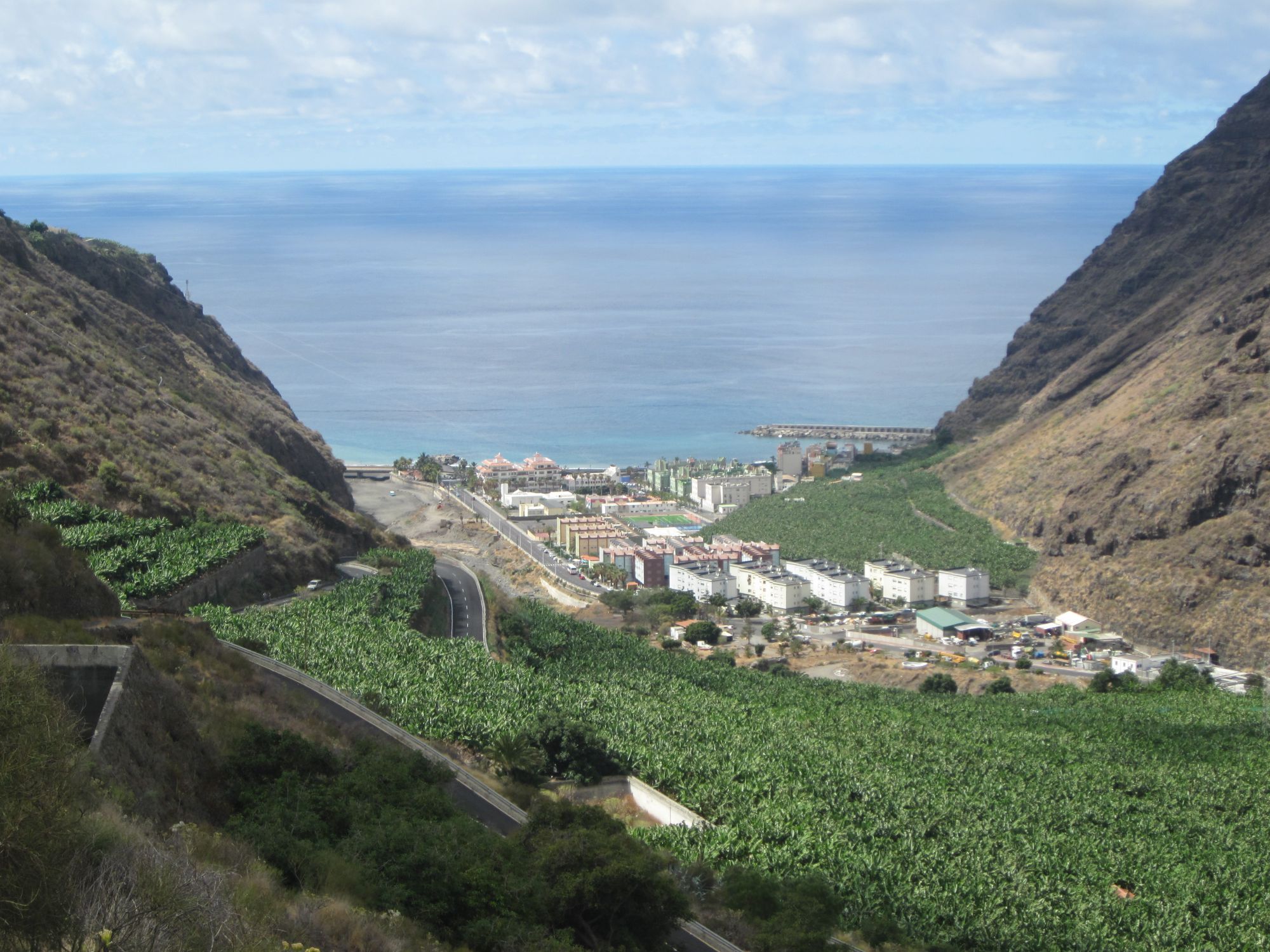 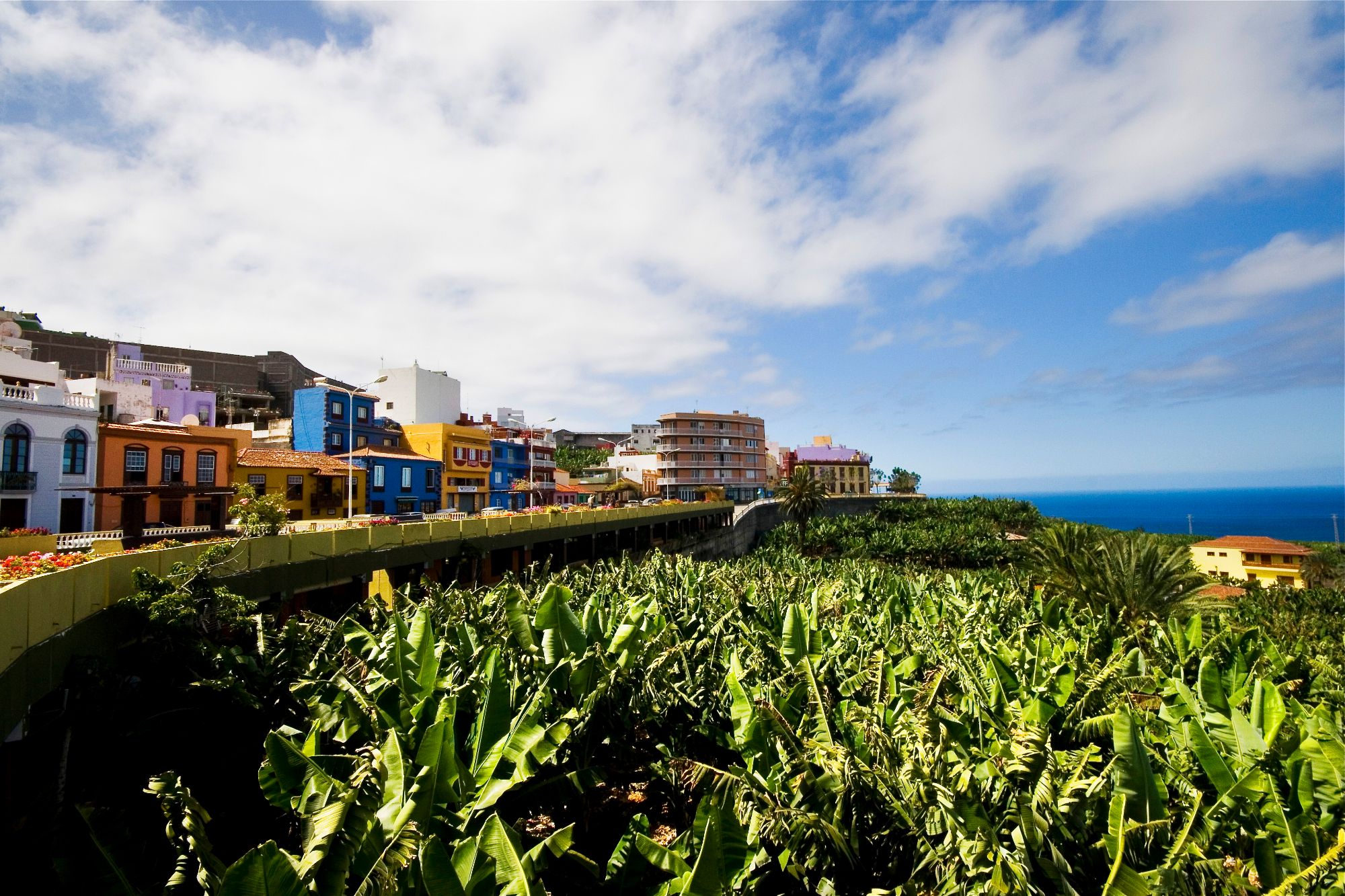 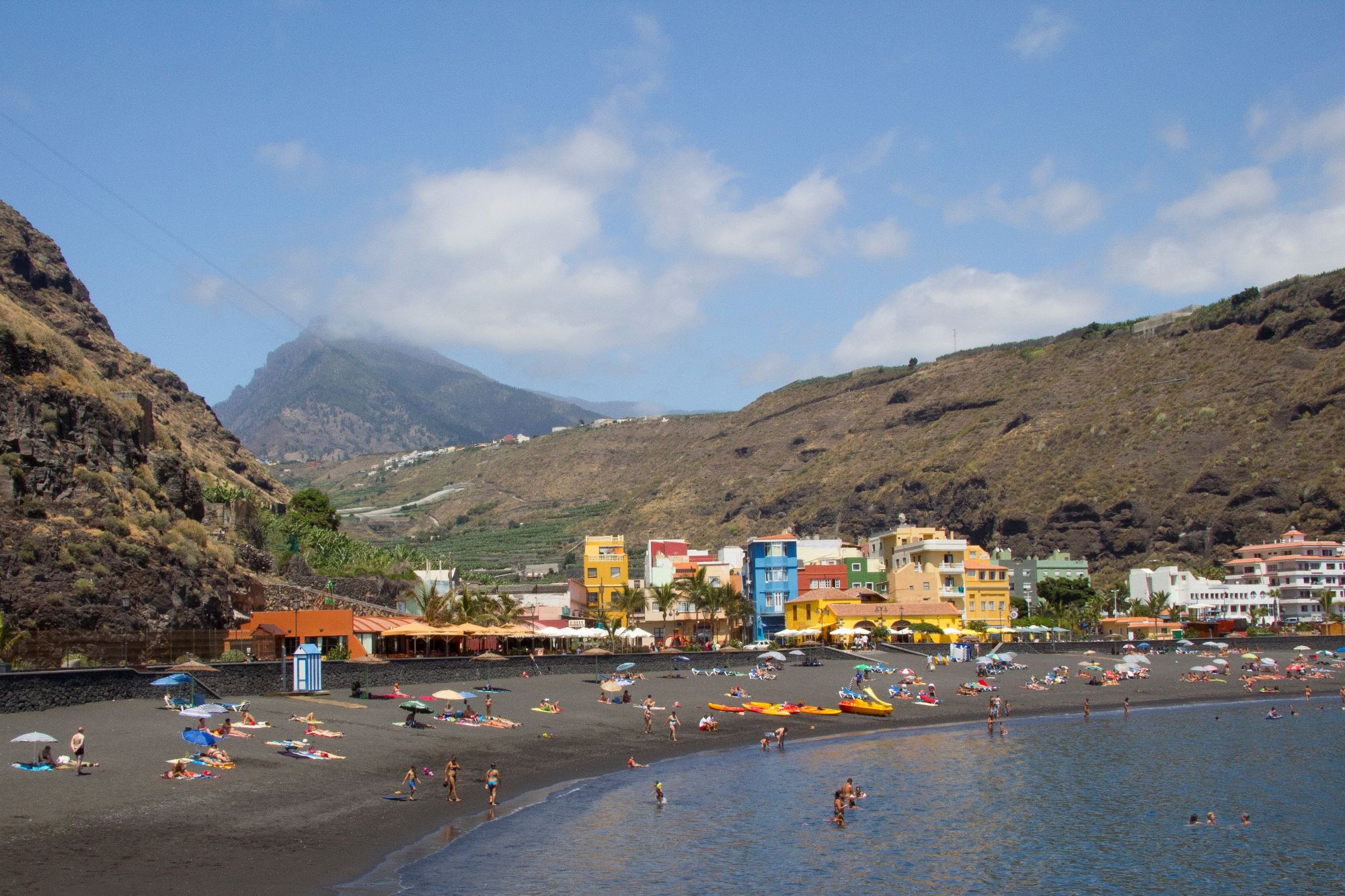 Things to see and do in Tazacorte (in no particular order):

The Puerto de Tazacorte - self-catering holiday apartments and beach resort
The beach resort of Tazacorte and the marina are approximately 500m from each other with a broad and flat esplanade linking the two which makes it perfect for a daytime or evening stroll.
The little beach resort itself is made up of a leafy boulevard with a few street cafes and where a selection of excellent self-catering holiday apartments are located. A few moments away is the sandy beach which is a real haven for swimming, snorkelling and relaxing on the black sand which retains its heat even on a cooler day. (Handy tip: if you have small children, make sure they stay near the breakwater end as there can sometimes be sudden large waves). Along the promenade and overlooking the beach are a group of excellent open-air restaurants which are popular with tourists enjoying a long and lazy lunch and with business-people alike. The speciality is of course fresh fish but the salads, goat's cheese, papas arrugados (wrinkly potatoes) are also something to write home about. Not forgetting the excellent La Palma wine.
Close by you will also find a small selection of shops which include a mini-market, chemist, beachwear shop, gift shop, ice-cream shop and a couple of café/bars. Although not a large resort by any means, it is possible to arrive at the beach resort and never leave for the entire week of your holiday! Check out the Tazacorte apartments here. 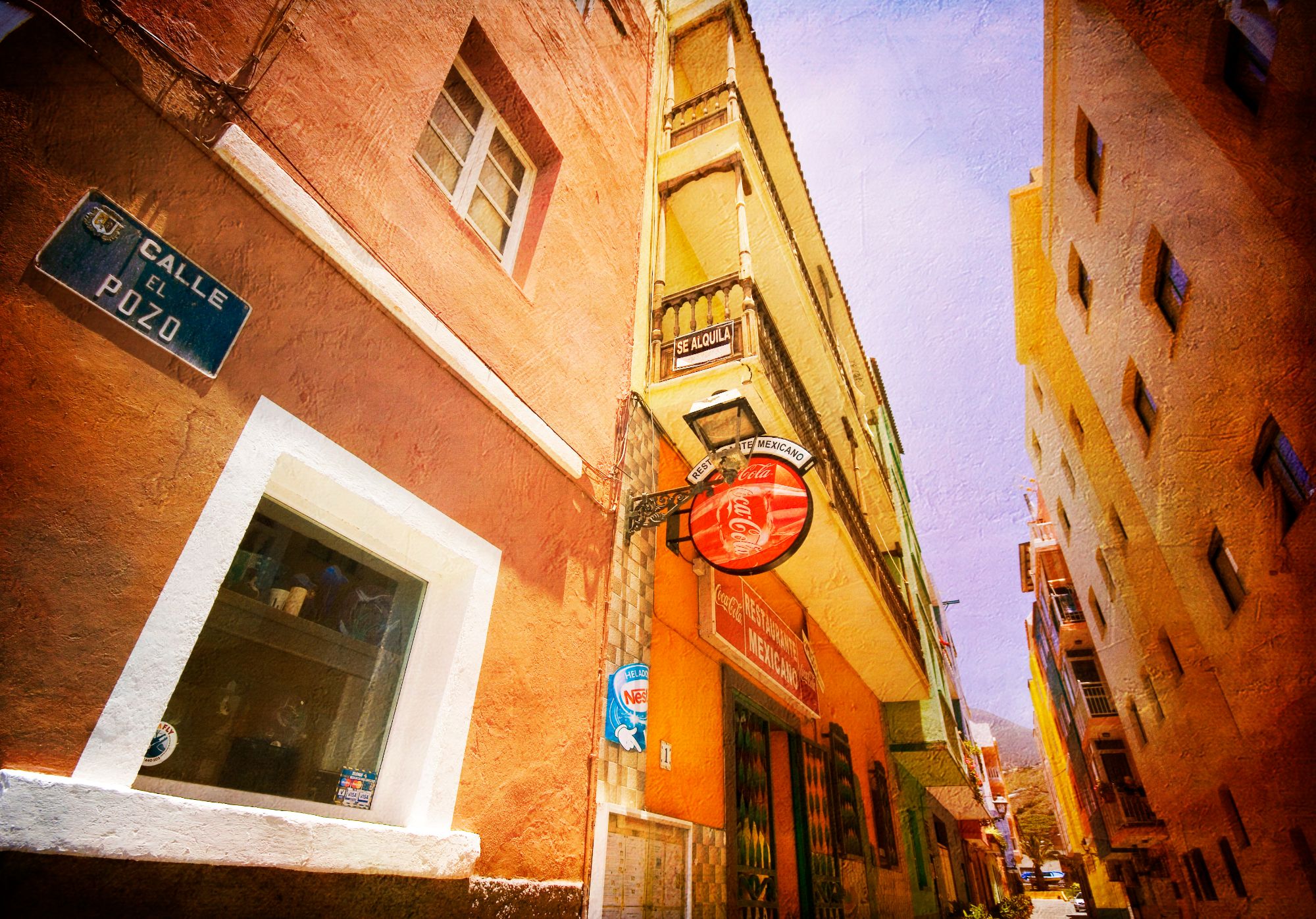 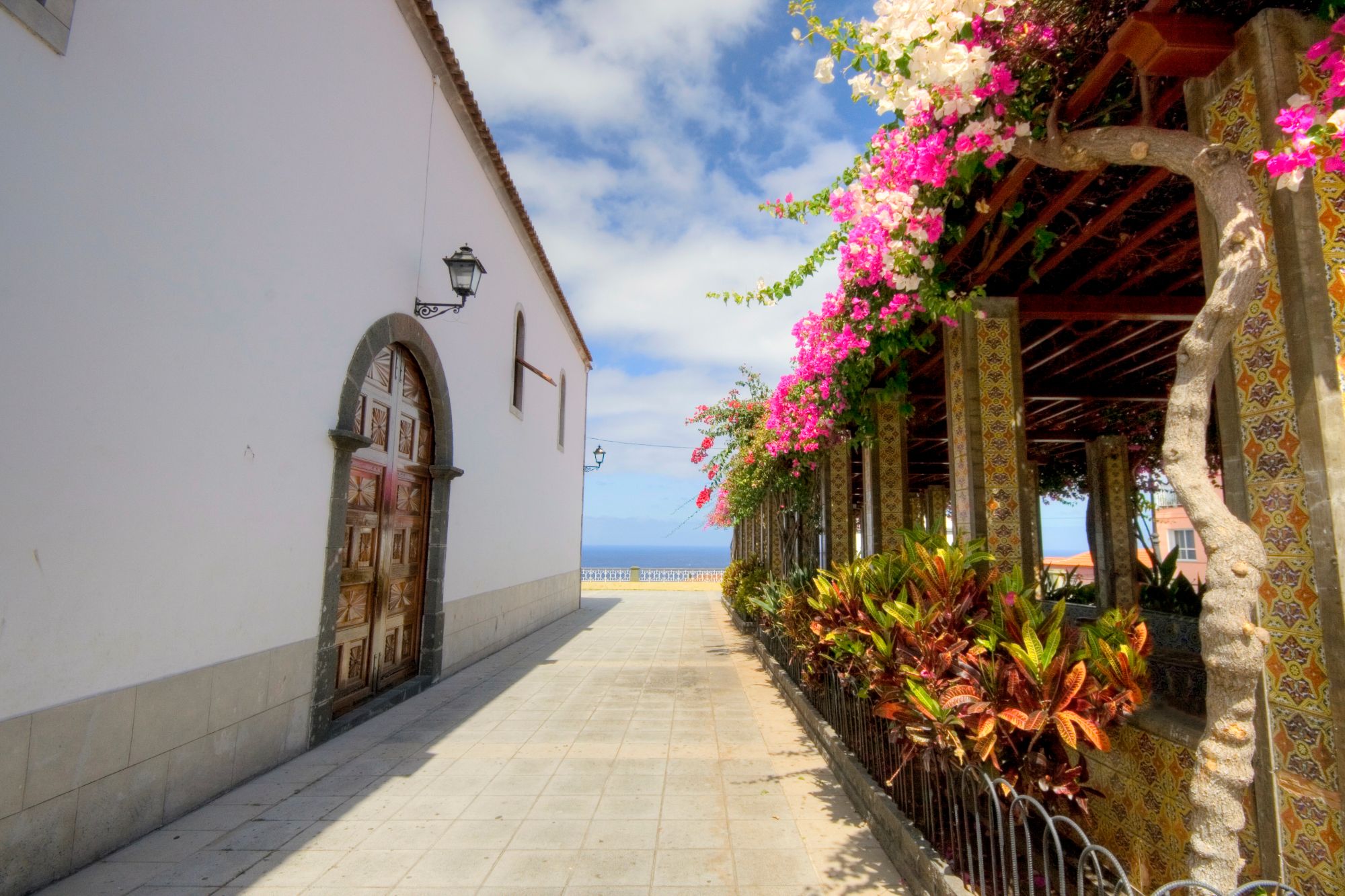 Cafe Bar by the Beach 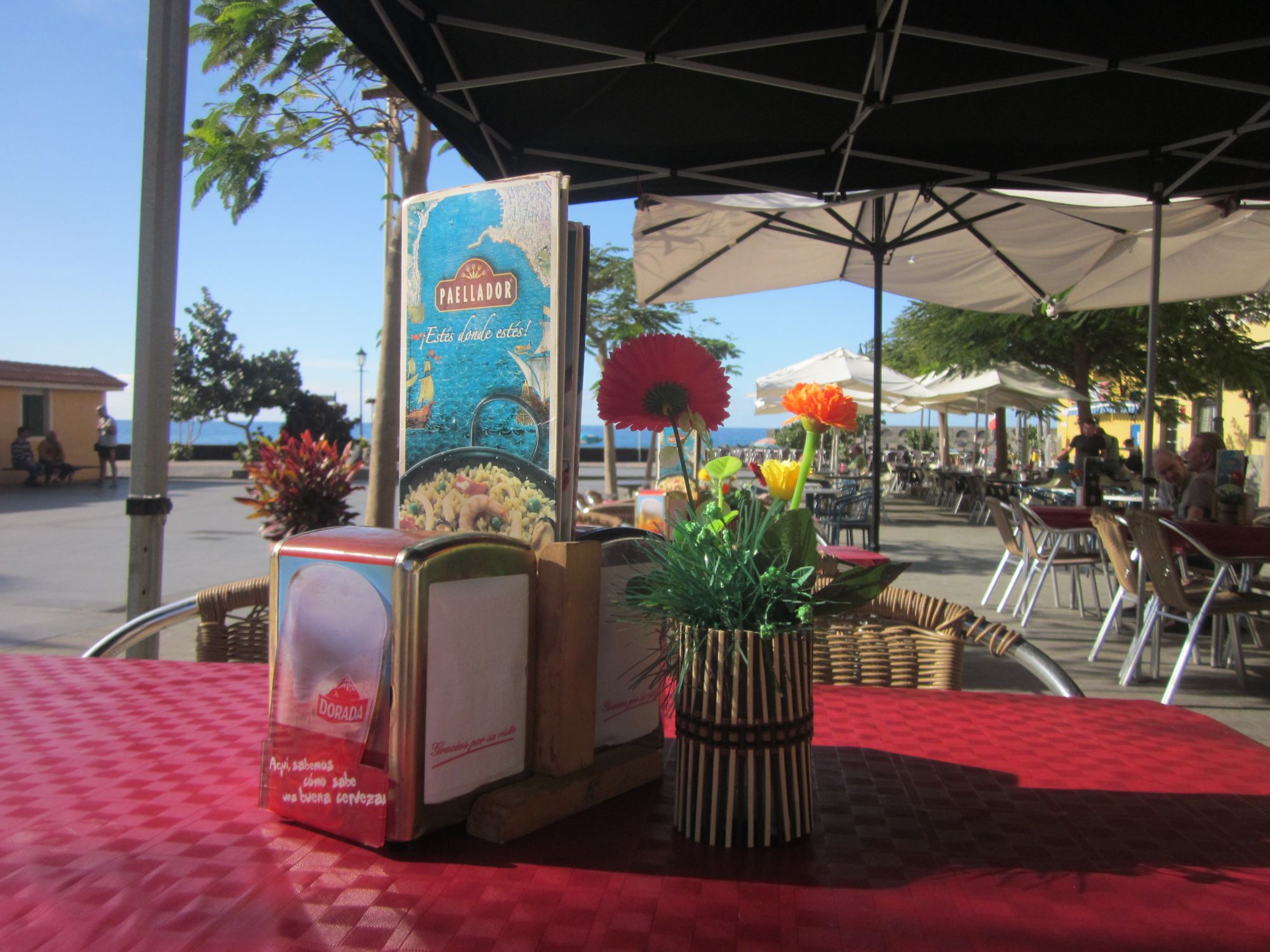 Restaurants, Bars, Cafes
The port area:
There is a selection of good restaurants on the promenade around the corner from the apartments which serve fish.
But they also serve other food! So do try the Canarian food (goat’s cheese, papas arrugadas which are the wrinkly potatoes, mojo sauce, etc.) plus salads, meats, etc.
There are also several cafés in the boulevard at the front of the apartments.
In the port area there are four more restaurants – two near the port entrance and two right at the end of the marina - all of which serve fish.
Tazacorte town:
If your looking for haute cuisine, the restaurant El Sitio at the Hotel Hacienda de Abajo, down the cobbled street opposite the church, is outstanding. The Hacienda, the first Emblematic Hotel in the Canaries, is a restored 17th century grand house owned by sugar barons so you can expect wonderful decor.
The Carpe Diem in Calle Nieve just down the cobbled street from the central roundabout is very popular (Open 6 - 10pm, closed Monday and Tuesdays) and also the relatively new Re-Belle situated by the church (open 5 – 10pm, closed Saturday and Sundays).
Bar/Café/Restaurants with sea view and great sunset:
For restaurant-style tapas there is La Tasquita. This is along the well-hidden walkway below the terrace in Avenida Constitucion, (opposite the Pizzeria and Bistro Marmota). Open Tuesdays to Sundays,12.00hrs to 15.00hrs and then 18.30hrs until later. Closed Mondays.
The Pizzeria Venezia along the Avenida Constitucion is where you can eat outside at the dining area opposite. They serve other dishes apart from pizza for example fish lasagne. Open Monday – Friday 19.00hrs until late. Weekends from 12.30 until late.
Bistro La Marmota is also in the Avenida and with sea-view seating. They have ‘creative’ tapas, cocktails and a selection of gins and local beers.
Anyone for cocktails at sunset? I think I just might! 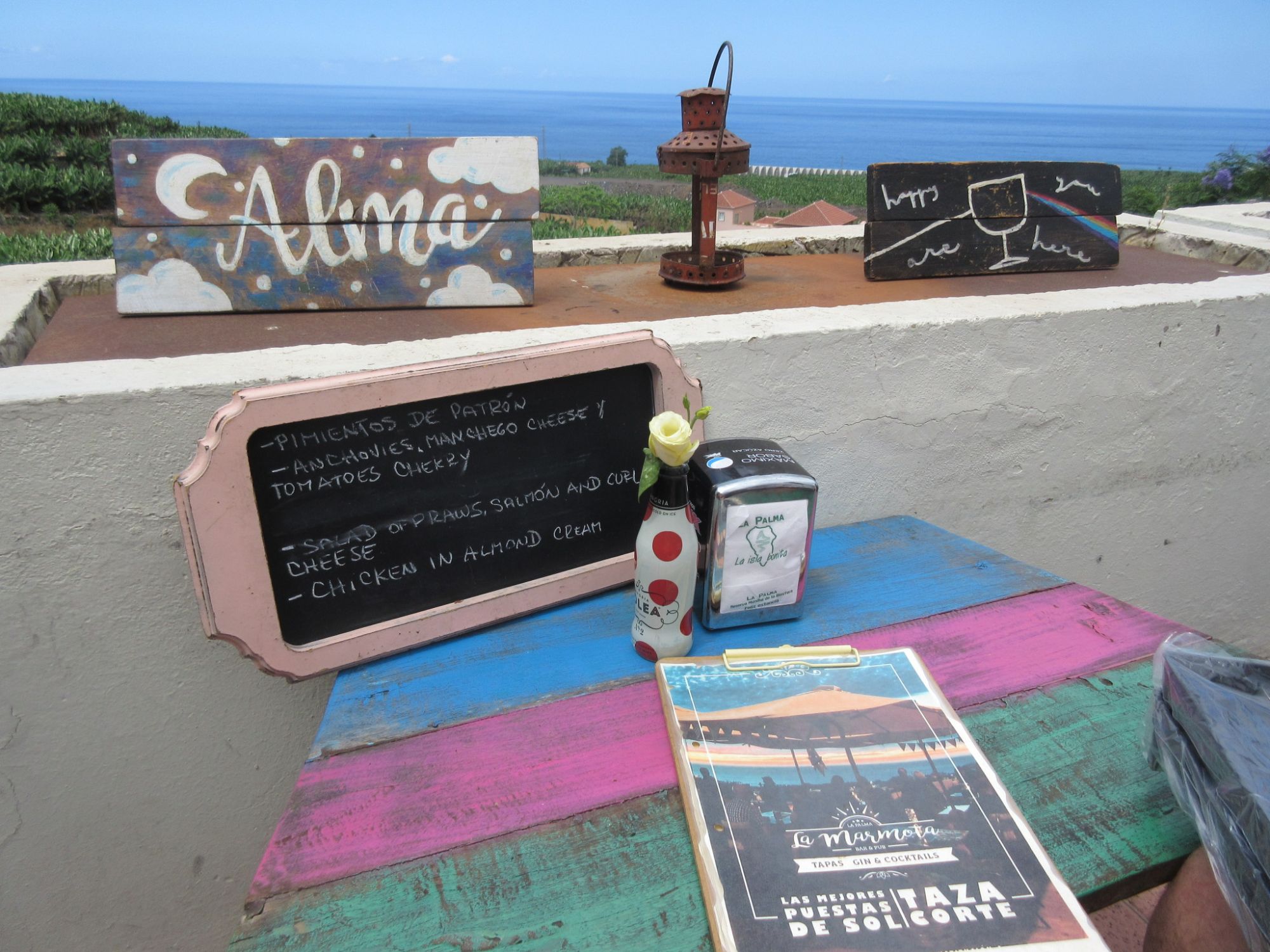 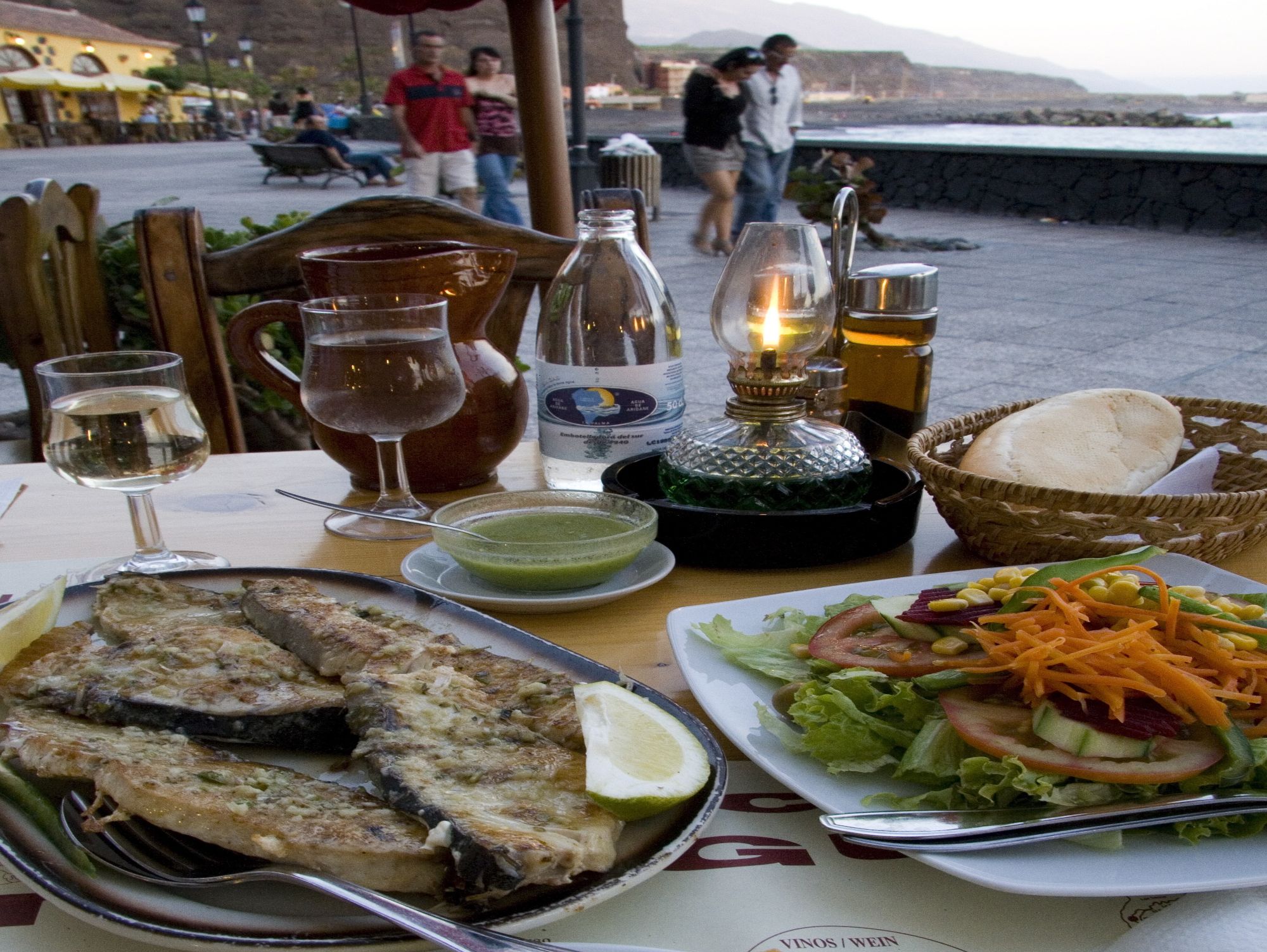 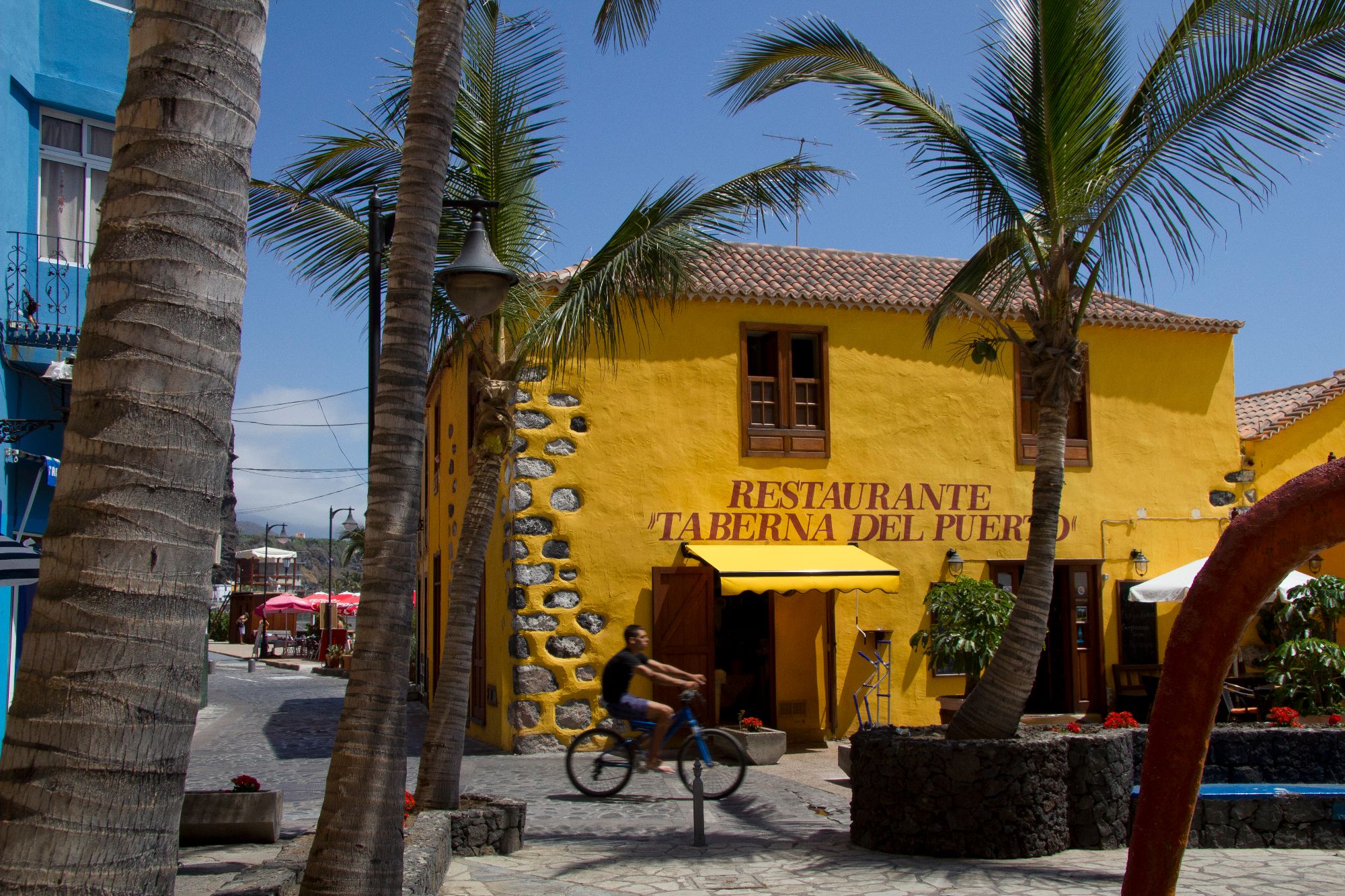 The Puerto de Tazacorte - marina
The harbour/marina of Tazacorte is at the opposite end of the promenade to the self-catering holiday apartments at Tazacorte. Near the marina is a pizza restaurant plus four excellent bar/restaurants within the marina. Apart from shiny yachts and colourful fishing boats, there are various boats which offer daily dolphin spotting and whale watching trips including the Fancy II, Flipper Whale Watching, Fantasy, Bussard, Mojo Picon sailing yacht and the Inia RIB (Rigid Hull Inflatable). Full information on these boat trips (prices, duration, type of trip) is included in your Guide to Tazacorte when you book with Holiday la Palma and you can book any of these boat trips directly with us. If you would like to hire a boat for a private group up to 7 persons or sport fishing, we can also arrange this for you. 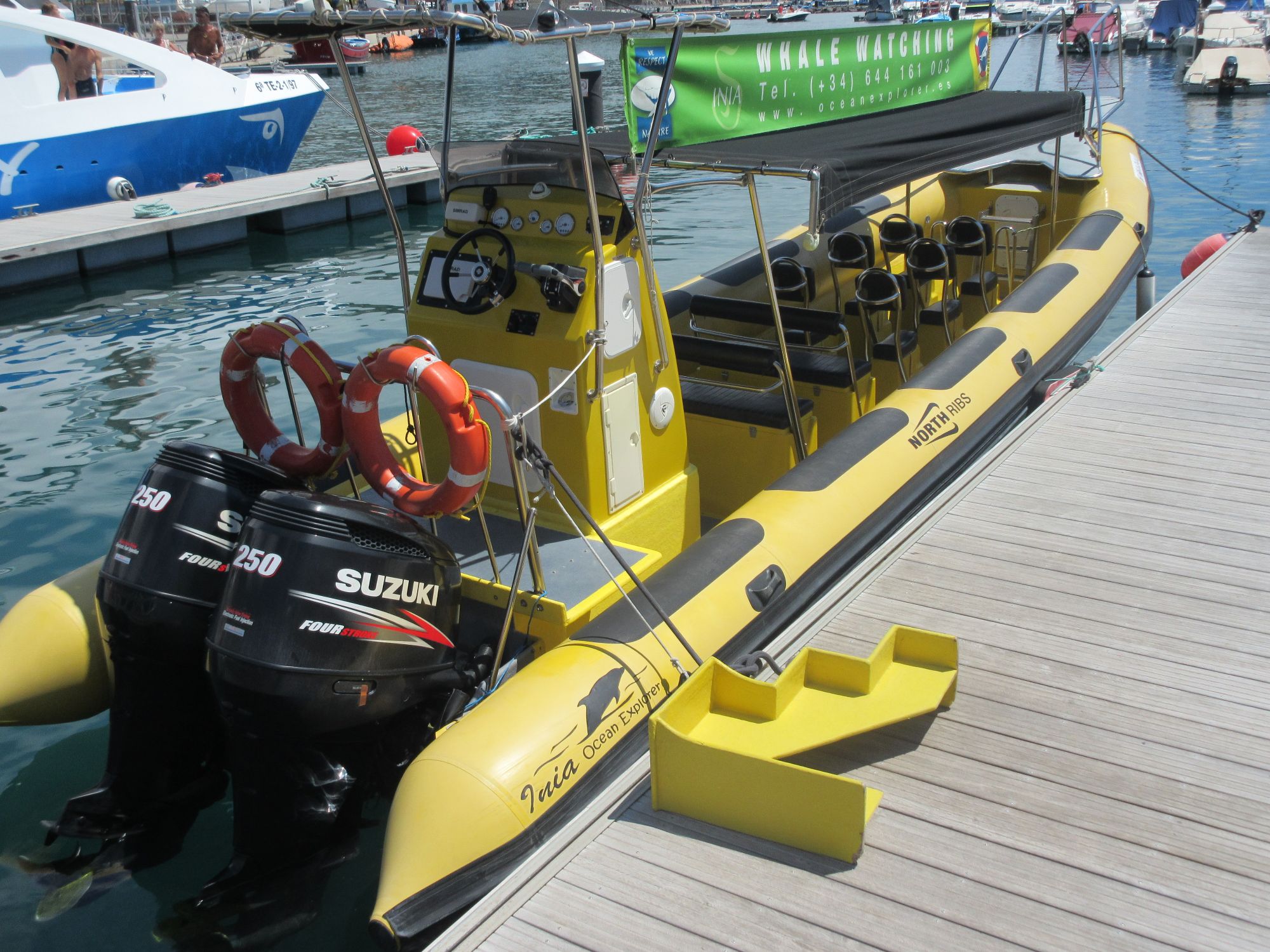 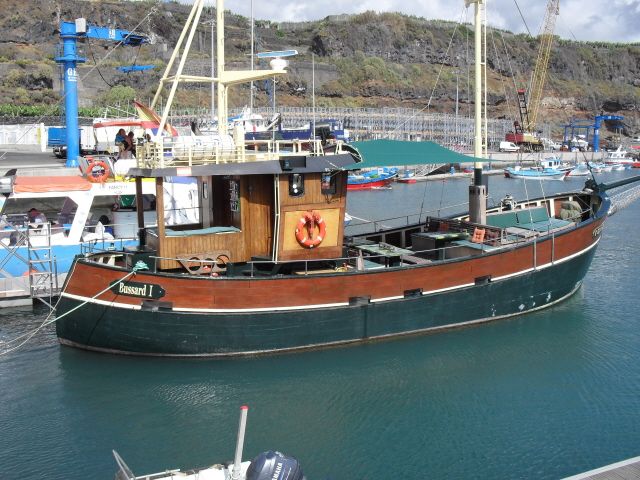 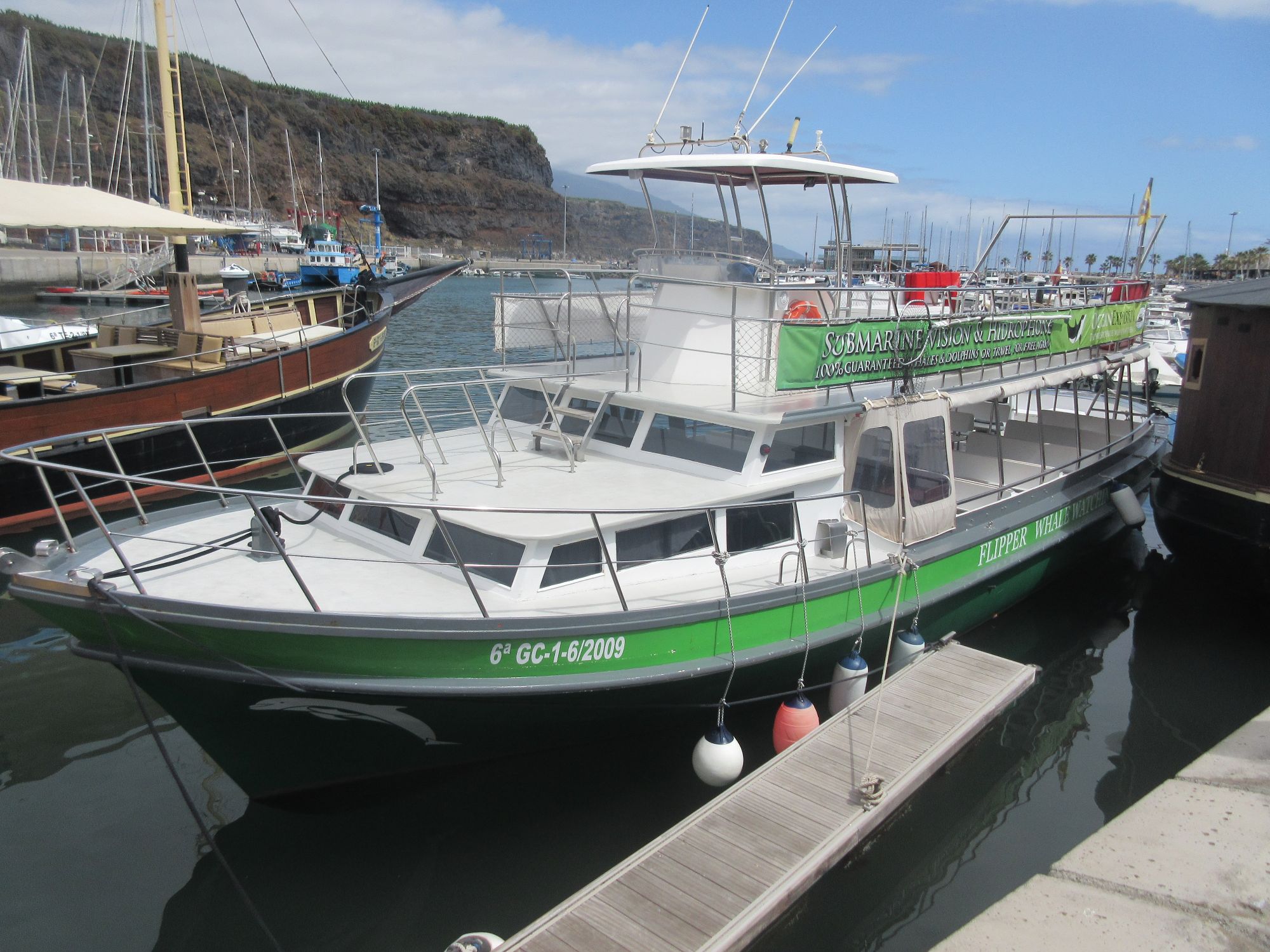 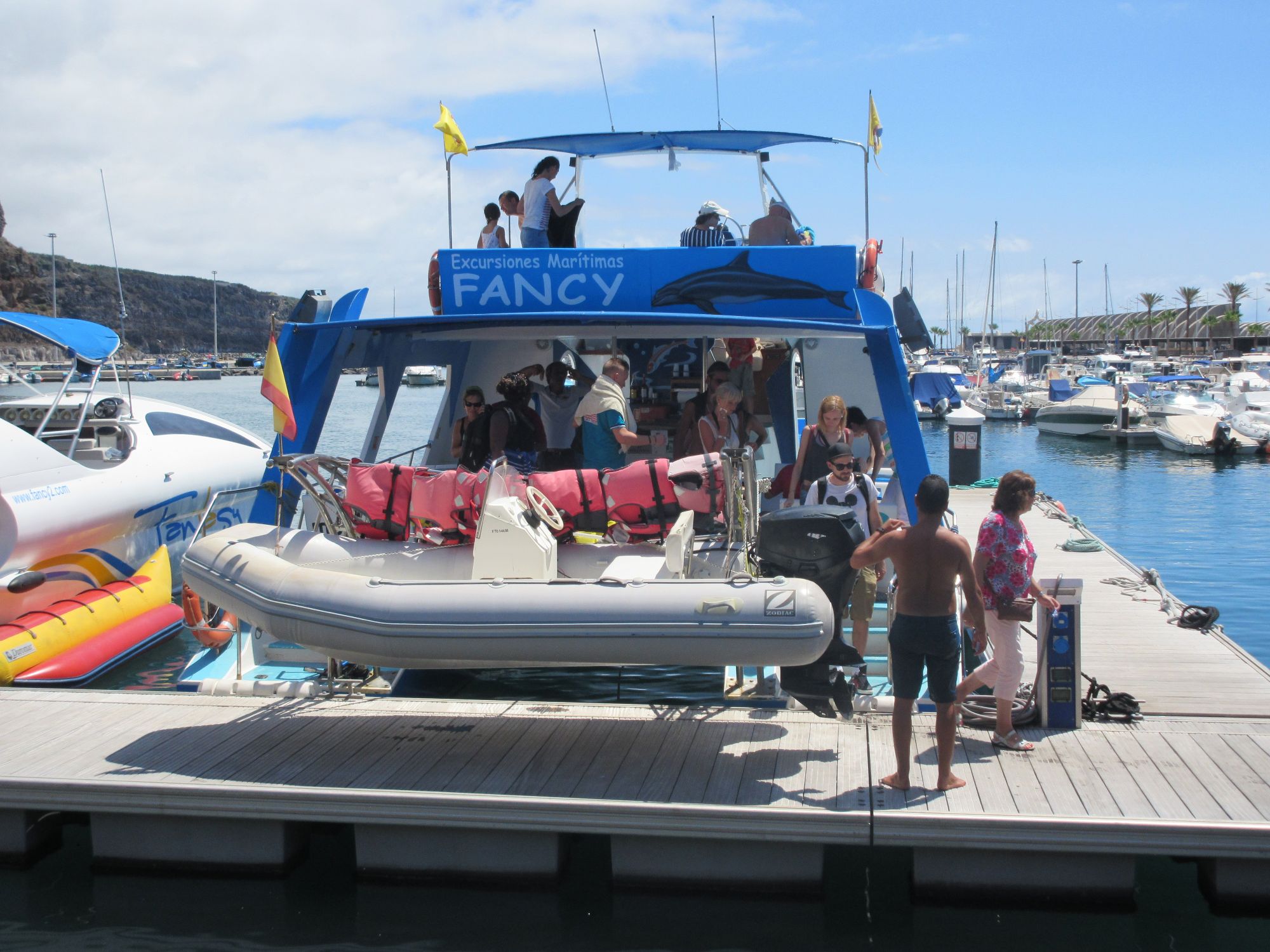 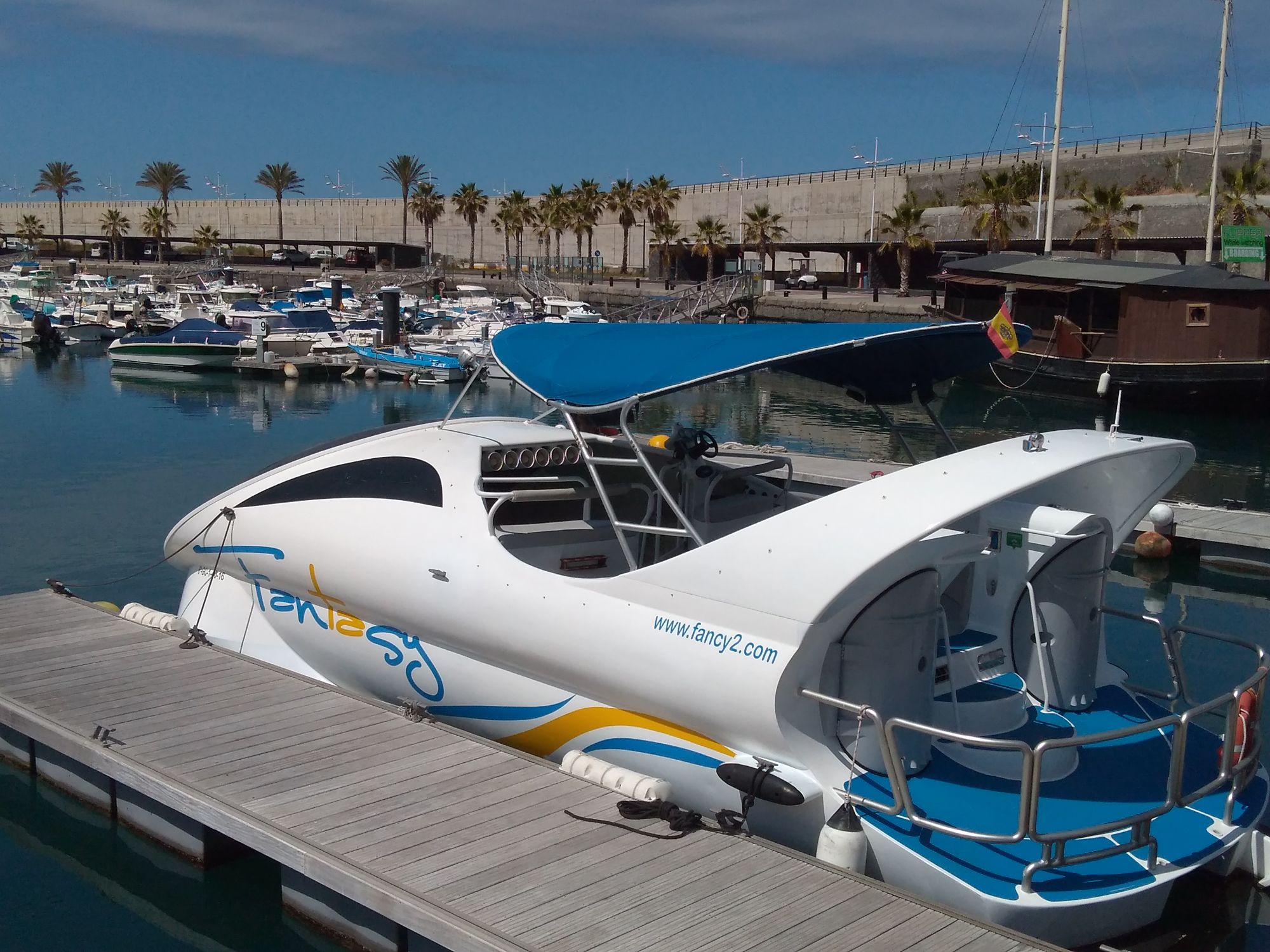 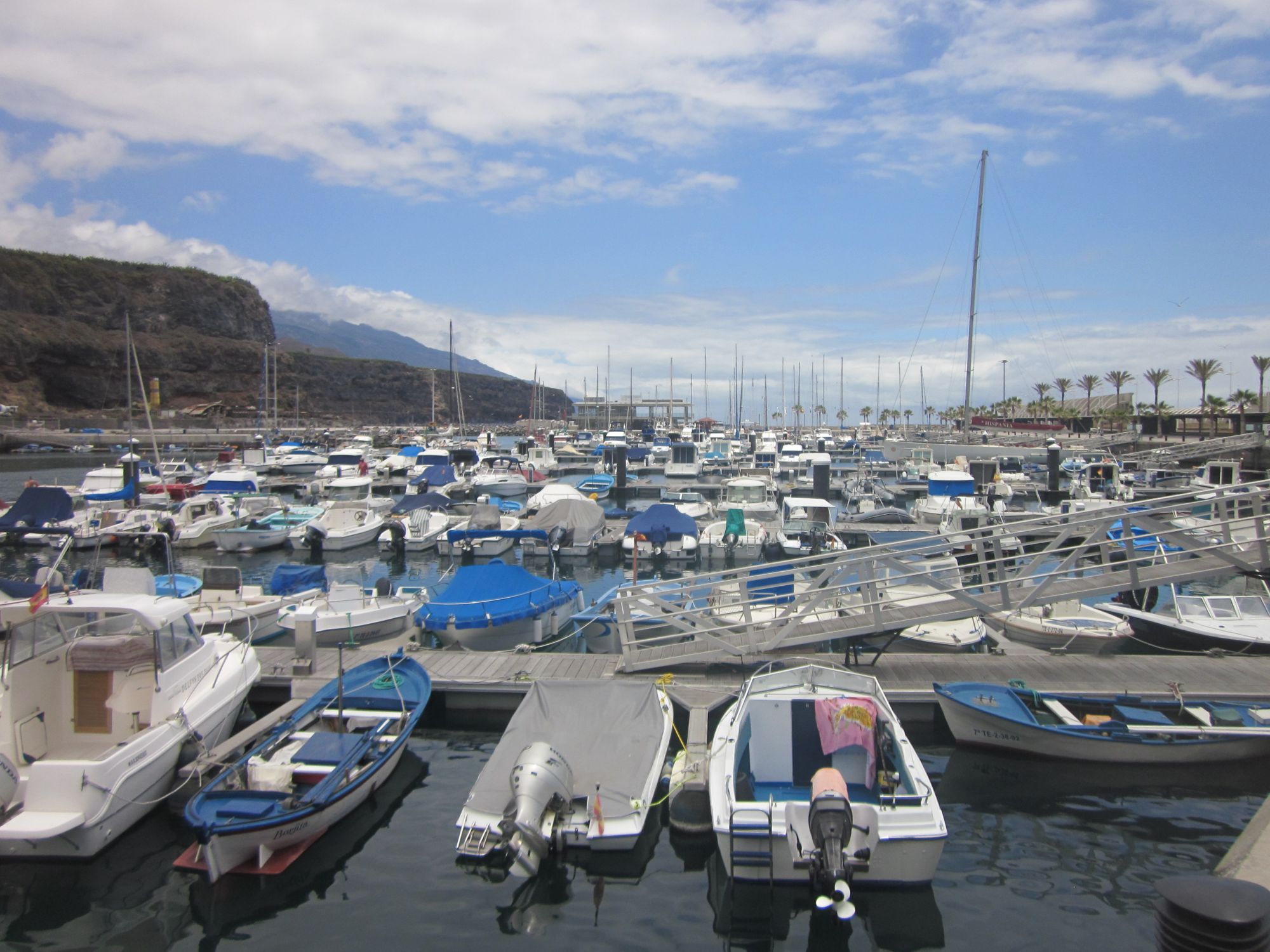 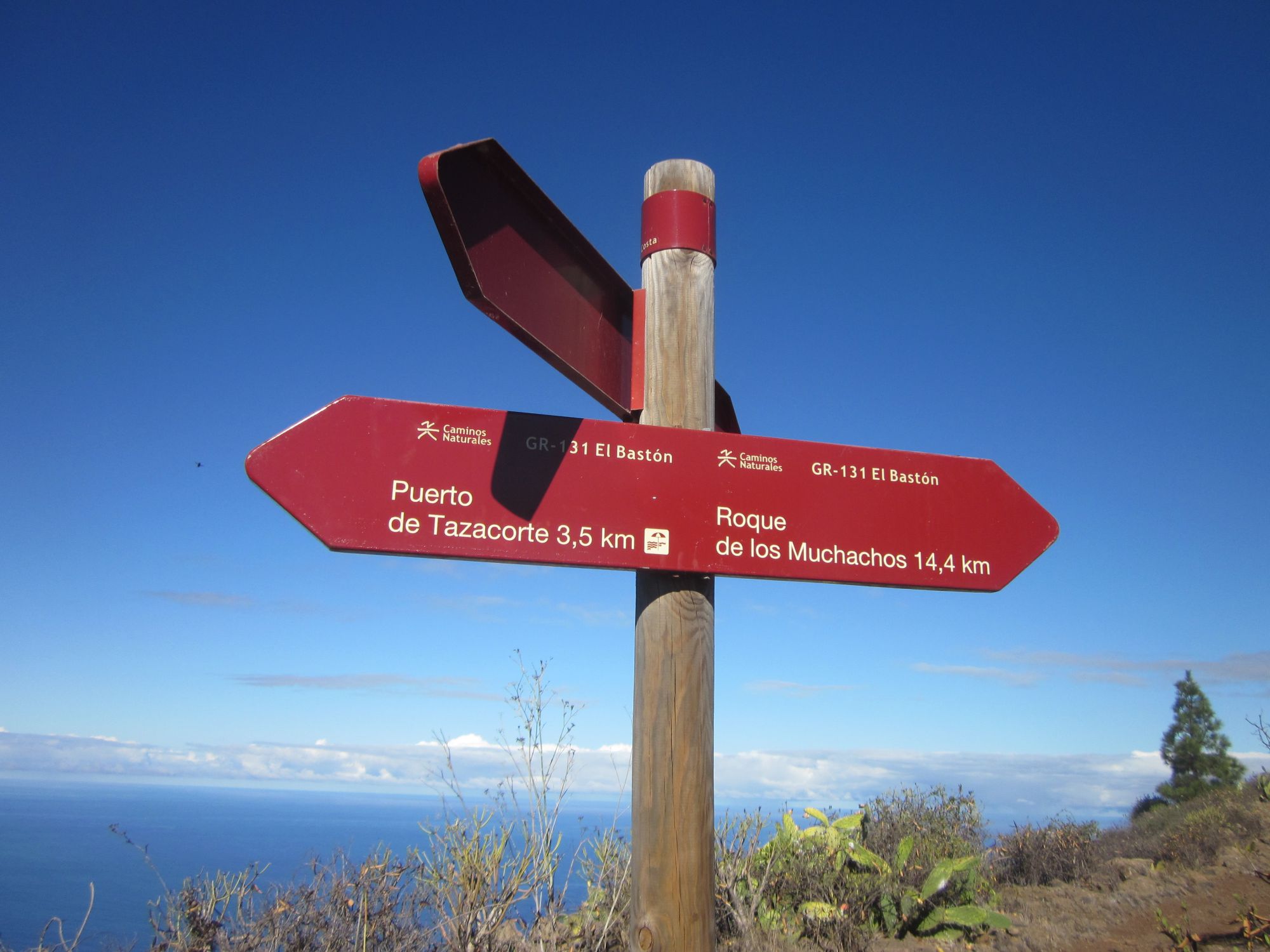 Tazacorte is a great base for walking too as this is where the GR131 El Baston begins/ends and the GR130 Camino Real trekking trail is just 1km away.
It's also a great location for the Caldera de Taburiente, La Cumbrecita and the Volcano Route.
When you book with Holiday La Palma, we provide you with walking notes for some of the main walks in the area such as the Caldera de Taburiente, Volcano route, La Cumbrecita and the GR130 Camino Real. 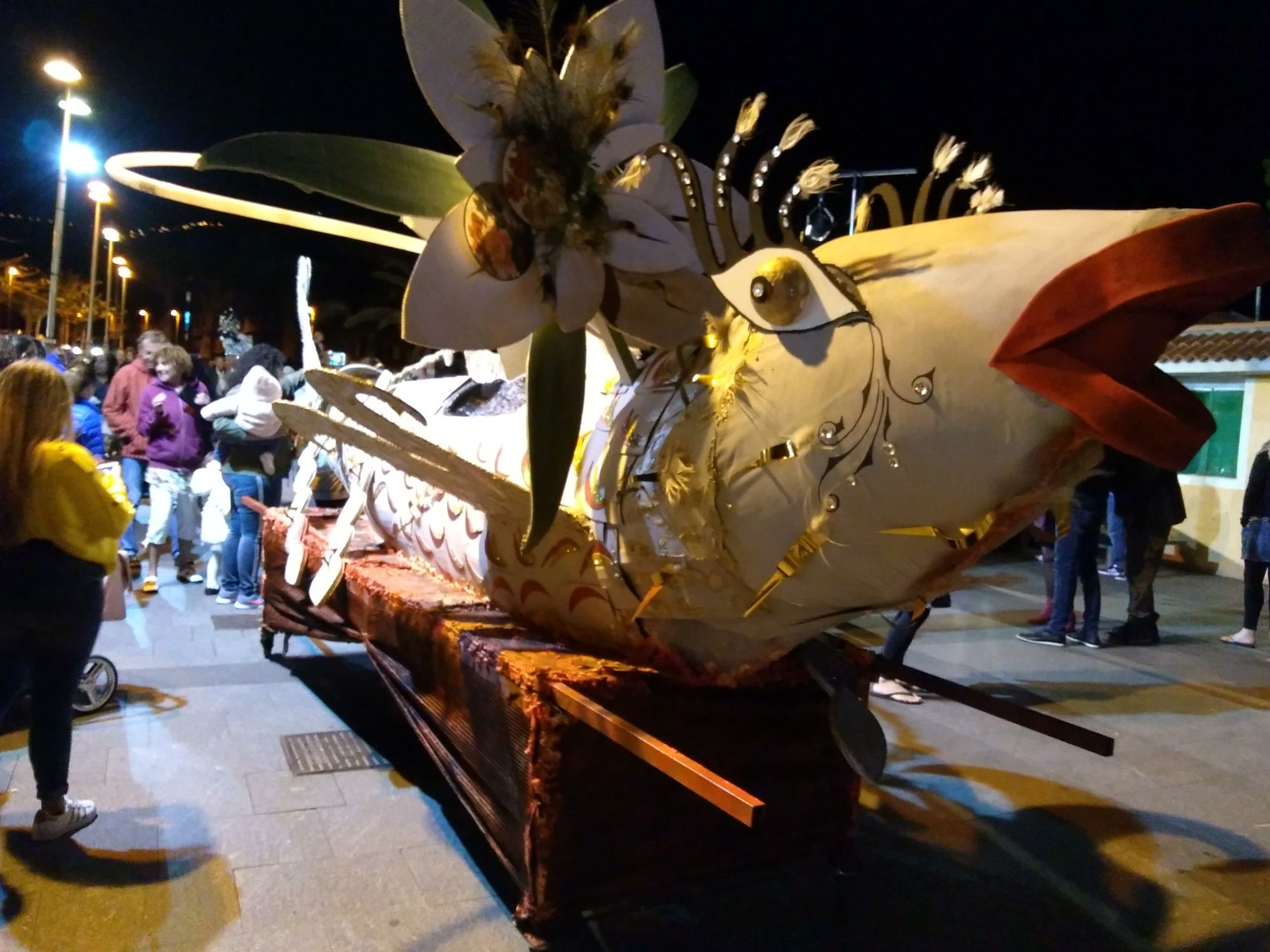 Fiestas
Tazacorte is no exception to the island’s love of fiestas and whilst there may be several mini-fiestas, the principal ones are -
April - Interment of the Sardine when there is much celebrating with live music and dance until at the end, the giant sardine is cremated
July - The Fiesta de Nuestra Señora del Carmen and the Fiesta de Beatos Mártires
September - Fiesta de San Miguel in September which also includes the Caballos Fufos with men being the front legs of decorated pantomime horses.
And now to add to the list is the huge Love Festival which takes place at the Tazacorte Port area in July. It's a massive fiesta which first took place in 2017 and looks set to be an annual event

Holiday apartments to rent at Tazacorte: https://www.holiday-lapalma.com/apartmentstazacorte.html
You Tube video which shows scenes from the Puerto de Tazacorte between 1930's and 1980's